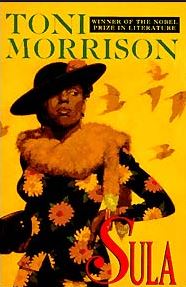 Winner of the Nobel Prize in Literature, Sula is the tale of an independent young black woman who lived before World War II, roughly (1920-1941). The story revolves around her personality, her friendship with her childhood best friend, Nel, and around their town’s reaction to Sula’s independent attitude.

So how can one friend betray another? I think that’s the question here. The answer is disappointingly elusive, for both the betrayer and the one betrayed. It isn’t made any easier when the course of a whole life is at stake. Morrison asks the question of who truly is morally wrong or right. It’s common knowledge that your friend’s lover is off limits, especially if they mean nothing to you. Friends who break that rule are not friends. And yet, there remains that tie. When something significant happens, you want to tell your friend, but now, and forever, they are gone. They can’t hear you. Or, you realize that you no longer want to tell them anything. There is that absence. That terrible loss. That forever. And then, who do you miss, really?

This book was loaned to me by a friend at work who found out I was reading Beloved. My friend prefers Sula to Beloved, and I am just the opposite. And while I typically can’t stand notes in the margins of a book, I appreciated the marks of my friend, which have added quite a bit to my understanding of the story, for Sula is full of symbolism that I might have otherwise missed.

I love Toni Morrison. She is an excellent writer with tremendously creative ideas and an unflinching ability to write about those hard, messy areas of life. (A little depressing.) Here is a sample from Sula:

In the back of the wagon, supported by sacks of squash and hills of pumpkins, Shadrack began a struggle that was to last for twelve days, a struggle to order and focus experience. It had to do with making a place for fear as a way of controlling it. He knew the smell of death an was terrified by it, for he could not anticipate it. It was not death or dying that frightened him, but the unexpectedness of both. In sorting it all out, he hit on the notion that if one day a year were devoted to it, everybody could get it out of the way and the rest of the year would be safe and free. In this manner he instituted National Suicide Day.”

I was all fired up thinking that the story would be about National Suicide Day, but it wasn’t. Now that I write this, it seems bad that I was a wee bit disappointed, but what finally happened with this seemed to symbolize what can quickly and without any thought go terribly wrong.

One thought on “Sula”