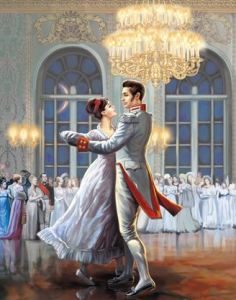 War and Peace is known for its massiveness. At 1,408 pages, reading War and Peace is like reading five novels. I don’t think Americans are typically required to read it. I wasn’t, not even at The University of Texas where I majored in Russian and East European Studies. So why read War and Peace now—since I’ve already escaped it once?

It’s a common question. The members of my book club are asking themselves this too. What have we gotten ourselves into? Is this book still relevant? Is it worth it? Might this a book be better put off until old age when we have absolutely nothing better to do?

Well, we say, it’s got to be a classic for a reason. It’s got to be good. Otherwise, it wouldn’t still be around. Right?

Were it not for my persistent feelings of inadequacy which spring largely from possessing a Russian Studies degree and never having read this book, I might have been able to worm myself away. But, there it is. My personal and psychological makeup require that I drag my eyes over these 500,000 words.

There is some solace. The introduction promises me that:

“Above all, War and Peace will move readers by virtue of its beauty as a work of art. It is a triumphant affirmation of human life in all its richness and complexity. That is why one can return to it and always find new meanings and new truths in it.”

In 1865 War and Peace was released serially in the magazine The Russian Messenger and was titled The Year 1805. It wasn’t until 1869 that it was first published as a single unit. So the first readers weren’t handed a tome that resembles an attractive door stop. Instead, they were spoon fed bits of story. War and Peace must have been like a soap opera or a telenovella.

Lots of pressing issues had to be on the Russian mind at this time. Twenty three million serfs had just been liberated (1861). This was a big change for Russian aristocracy. The price for labor had just gone up—way, way up! In effect 23 million people now had the full rights of free citizens, could finally marry without having to gain consent, could own property, and could create and own a business. And, they could buy land. Shocking. Simply shocking!

So perhaps, part of the contemporaneous appeal of War and Peace was a nostalgia for the past. The time when the power and significance of Russian society was unshakable. There were ways one had to act. A foreign language one needed to know (French). People one needed to know. Connections one had to establish or face the consequences of a harsh life, or worse.

And at the time of the book’s publication, we are 52 years from the 1917 revolution, which would change everything. Revolution seems to weak a term for what happened in 1917. But its the word we’ve got.

So picture yourself on a cold night in 1865. Downton Abbey has yet to be written. Television has yet to be invented. In fact, I’m pretty sure you’re not living with electricity, and there’s no Facebook. The latest issue of The Russian Messenger has just arrived. Thank goodness for this Leo Tolstoy chap, you think to yourself in French. Wonder what ol’ Pierre has gotten up to now. How is Prince Andrey?

Settle back into your easy chair and prepare to be transported back to an earlier time. You’re in the drawing room of the wealthy 40-year-old Anna Scherer in 1805. She goes by Annette. The year 1812 is still a ways off. There’s a prince who is having trouble with one of his sons, Anatole. The solution is simple. Marry the boy off. Annette will see that it’s done.