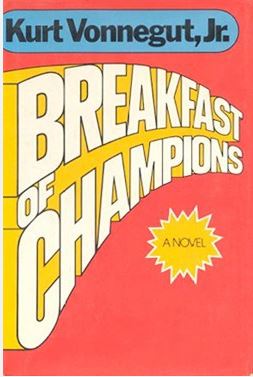 So while I was supposed to be reading War and Peace, I started reading Vonnegut. There’s this whole Vonnegut/Dovlatov connection I keep trying to make, but to read more Dovlatov, I either have to wait until April for the release of Pushkin Hills in English OR I have to learn Russian. Ok, so I know some Russian. I know enough to eat and travel. And to get some quizzical looks. Rosetta Stone, BTW, is turning out to be great for Russian pronunciation.

Anyway, I read Breakfast of Champions a very long time ago. I’m reading it again because I remembered how intensely creative Vonnegut was with his structure and storytelling. On this read, Vonnegut pummels me over the head with foul language and imagery. Apparently, I used to be immune to this. Now, not so much.

Breakfast of Champions—wow—what to say about this book. It is all over the place and perfectly organized at the same time. It has characters you don’t want to get to know, and yet, like the train wrecks they all are, you can’t stop reading about them. Hmm.

And speaking of trains, I found Vonnegut’s ideas about machines to be very interesting. Vonnegut really develops this, but here is the kernel:

‘You are surrounded by loving machines, hating machines, greedy machines, unselfish machines, brave machines, cowardly machines, truthful machines, lying machines, funny machines, solemn machines,’ he read. ‘Their only purpose is to stir you up in every conceivable way, so the Creator of the Universe can watch your reactions. They can no more feel or reason than grandfather clocks.’

Breakfast of Champions is the kind of book that I think I want to read again, maybe in 20 years. Maybe then, I’ll be able to digest it fully. And Vonnegut, like Dovlatov, is one of those guys you wish was still around so you could say stuff like: hey, what do you think about the 2045 project? What do you think about immortality for humanity? Isn’t that a really bad idea?

I’d love to put those guys in a room, ohh and add in George Carlin, who is also now in the club, introduce the topic, and let them go. What I wouldn’t give to hear that conversation. I wonder if D wouldn’t be too polite for these two rambunctious Americans. Would he sit there with a thin smile on his lips, thinking how uncivilized George and Kurt were? Or, would he, after almost coming to blows on certain subjects finally let loose with some raucous laughter, teeter on his chair, and nearly fall over?