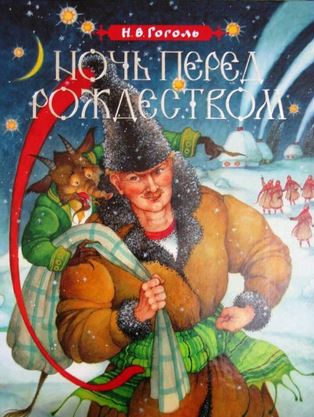 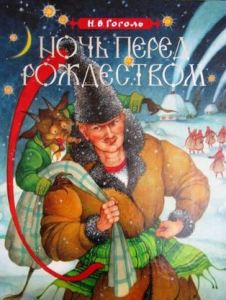 Nikolai Gogol was born in Ukraine in 1809. He died of starvation (and possibly depression) when he was nearly 43 years old. Gogol is best known for his book Dead Souls and for his short stories, “The Overcoat,” “The Nose,” and “Diary of a Madman.” He also wrote Evenings on a Farm near Dikanka, which I would now like very much to read.

I have long heard of Gogol but until recently had never read anything written by him. I am excited to discover him because he is so very very different and refreshing.

The Night Before Christmas was a fun read. It begins as a witch flies into the sky and fills her sleeves with stars. The devil has a plan to get back at a blacksmith/painter for an unflattering painting the blacksmith has done of him. The blacksmith is in love with the most beautiful (and spoiled) girl in the village and travels all the way to Petersburg to ask Catherine the Great for her slippers.

Here is a quote from early in the story:

“Meanwhile the devil stole silently up to the moon and stretched his hand out to seize it, but drew it back quickly as though he were scorched, sucked his fingers and danced about, then ran up from the other side and again skipped away and drew back his hand. But in spite of all his failures, the sly devil did not give up his tricks. Running up, he suddenly seized the moon with both hands; grimacing and blowing, he kept flinging it from one hand to the other, like a peasant who has picked up an ember for his pipe with bare fingers; at last, he hurriedly put it in his pocket and ran on as though nothing had happened.”

The book also has some very funny parts regarding the witch’s suitors hiding in coal sacks. All in all, The Night Before Christmas is a fun entertaining read with some insights on what it was like to live in Ukraine in the early 1800s.

One thought on “The Night Before Christmas”