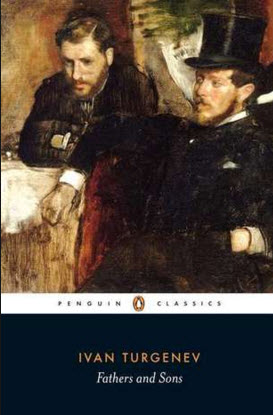 I don’t know what it is, but if someone tells me to read a book or an author, I automatically resist. The more they rave, the more I resist. So way back when, I asked someone to make a list of must-read Russian authors, and Turgenev was on this list. So, some 20 years later, I am picking up Fathers and Sons.

Or Fathers and “Children”—but maybe this is just me overly concerned with the correct translation—and accuracy. The topic is nihilism (am I a nihilist?) and this is what I should be concerned about. As explained in the novel, a nihilist is “a man who does not accede to authority, who does not accept a single principle on faith, no matter how great the aura of respect which surrounds that principle”), but my mind is struck more with the situation the father is in. Nicholai Petrovich Kirsanov (aged 40 ish) has taken up with his servant girl (Theodosia or Feodosya or Phenechka aged 20 ish) and fathered a child. This sends my mind into a tailspin and derails me from any sophisticated discussion of nihilism to come.

The story begins on May 20, 1959 as Nicholai Petrovich awaits his son’s (Arcadii’s) return from Saint Petersburg as a university graduate. Arcadii has brought home a friend, Evgenii Vaselivich Bazarov, a medical student and a nihilist.

Since Bazarov isn’t too taken with Arcadii’s uncle Pavel, Arcadii explains his uncle’s early life and heartache. It’s a sad tale and told well by Turgenev—sad, because love hasn’t changed over time. Pavel is brokenhearted—I won’t rob you of the story, but Bazarov, our nihilist, remains unmoved:

“…I would say that a fellow who has staked his entire life on the card of woman’s love and who, when that card is trumped, goes all to pieces and sinks to such an extent that he’s not fit for anything—a fellow like that is no man, no male.”

I saw this in my mother (for my father), and it makes me sad to read it here. She would say it’s better to have loved and lost than never to have loved at all. But is it love to have loved a phantom? One’s own illusion, someone with no more basis in reality than a character in a book?

“Pavel…was…on the threshold of that troubled, twilight time, a time of regrets that resemble hopes and of hopes that resemble regrets, when youth has gone by while old age has not yet arrived.”

It’s a hot night as I write this. The television has been off. All the windows are open. A light cool breeze blows gently through. It’s summer here, like in the story. The crickets are chirping and once in a while a car goes by. It’s quiet as I read about Bazarov’s family. I feel I have met this family before. I have met his mother before. I wax nostalgic about this for a while. Tonight, after walking around town, appreciating the rolling hills and the setting sun, feeling the cooling of the night, I’m not so very sad. I wish for this lifestyle every night. This routine of coming home, eating dinner, studying Spanish, walking around town, and sitting down to read.

Authors love to torture their characters, so of course, Bazarov has to fall in love. He is quite wretched, probably more so because he thought he was immune to such things. It’s interesting for the reader to watch him squirm. We know that having love in his life would be good for him and we want to see him get it, but he’s in his own way. Oddly, he declares his love to the woman he cares for because he gets so worked up about it. She doesn’t respond, yeah or neah. And this given all of his pride and self conceit is difficult for him to take.

Turgenev captures youthful restlessness well. When Bazarov cuts his visit to his parents short, his father and mother are very sad. Children can’t help but mistreat their parents, without meaning to. And a long married couple who weathers the various storms of life ends up rather like this:

“It was then that Arina Vlassievna drew near to him [her husband] and, placing her gray head against his gray head, told him: ‘What can a body do, Vassya! A son is a slice cut off the loaf. He’s the same as a falcon: he felt like it, and he winged back to the nest; he felt like it, and he winged away. But you and I are like brown autumn mushrooms that grow on a hollow tree: stuck there side by side and never budging from our places. I alone will remain unchanged for you through all time, just as you will for me.”

This is a beautiful and apt way of putting marriage, I think.

But who is this guy Bazarov? Is Turgenev trying to tell us that he’s bizarre? And his first name, Evgenii (Eugene), a reference to Eugene Onegin, the bad boy of Russian literature? (Although for bad boys, I like Pucharin.)

But that’s just it. Bazarov isn’t bad. He’s just lost. And when he finally is lost, we feel sad. It was a waste, ridiculous, preventable, but a good thing for frogs, no doubt.