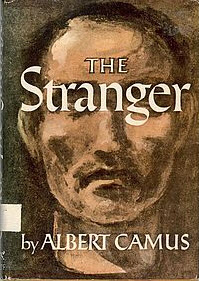 This book won the Nobel Prize in Literature. My edition was translated by Matthew Ward. There was a lot of build up about how great this translation is and how it was specifically directed at the American audience. I noticed a couple of grammatical errors and wondered if those were in difference to us Americans.

I couldn’t sympathize with Meursault, the protagonist. I didn’t understand why he did what he did during Part One. That he did not cry at his mother’s funeral didn’t bother me (I cried beforehand), but that he supported his acquaintance in beating up a woman who he didn’t even know—well, that lost my sympathy.

I know. I know. I should think about the time in which it was written. Blah, blah, blah. I don’t care. I am tired of crimes against women. And there was no way I was going to see it as justifiable.

Meursault couldn’t say that he cared about anything. His girlfriend would ask him if he loved her, and he would say: well, I don’t think it matters, but no, I don’t think so. I kept getting stuck on “it doesn’t matter.” To whom? To Meursault? To the girl? To life in general?

The narrator did seem very genuine in Part Two, and I was thankful for the honesty of Camus here, especially the part where Meursault is thinking about escape. That rang true for his character. But the whole story felt like a vehicle to raise a discussion of the existence of God or the afterlife or lack thereof at the end.

I enjoyed the descriptions of the beach and the heat. The murder irritated me, because I wasn’t buying the motivation for it.

The cover art was cool… Probably I’m missing something important.

A friend of mine said she LOVED this book, but sadly it was lost on me.

2 thoughts on “The Stranger”